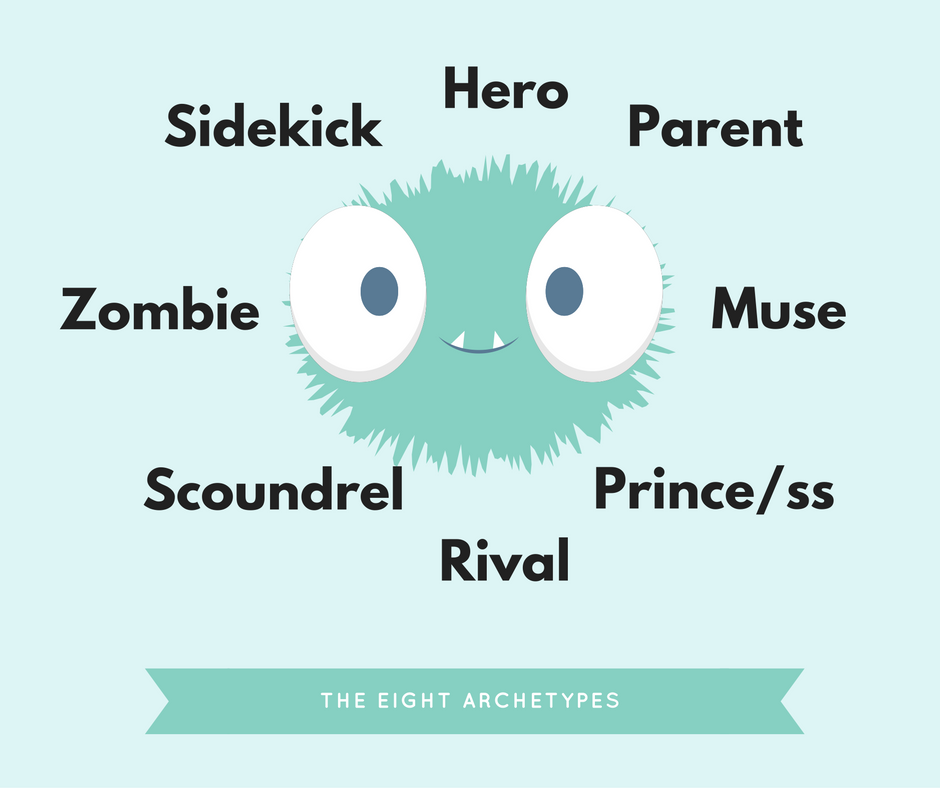 Humans are highly complex. You are constantly changing, from situation to situation, and here, enter the core eight variations found within you. Which of these archetypes do you tend to be in the most? Perhaps you’re a mix of the hero, but often also in the role of the sidekick? Or perhaps you’re more inclined to be in the role of the parent? Or do people often see you as a scoundrel?

Your top four letters represent your core self. When you rise and act on inner motivations and things that you find inherently valuable. Or when you trust your awareness and instincts. And when you act on your needs and goals. When your energy and motivation is high. An ENTP that acts on their interests (N) and beliefs (T) in a way that is true to their temparament (EP) is in the ENTP – hero archetype.

You may not have a shiny sword, but being yourself gives you immense contact with your energy and your inner motivation, and with it, the ability to solve many problems in your life.

This is the type of person who strikes you as highly good and valuable but also slightly rattled, easily frustrated or overwhelmed. The mentor usually feels like people demand or expect too much from them. INFJs are often described as mentor-types or counsellors of others, and ESFJs are often seen as the classic “parent” type, but any type can be a mentor, in their own type-unique way.

The mentor archetype represents you when you act for something you find inherently valuable or important, while neglecting your interests, your need for fun, stimulation, and energy. Your first (I/E) and second letters (N/S), are reversed. Your third (F/T) and fourth (J/P) letters are however still the same.

You may appear easily frustrated and your mood is less stable as you neglect your interests and instincts to focus on others. An ISTP here begins to resemble an ENTP. This is the second most common archetype you can channel, which makes it very common.

The sidekick chases for fun, stimulation, thrill and inspiration. But they lack contact with their inner motivations. Instead, they act on the motivations of others. A sidekick is someone who trusts others’ moral compass or guidance, but neglects their own.

The sidekick has neglected their third and fourth letters, and as a result, they begin to appear slightly stressed or tense, often because they’re working hard to live up to outer expectations. For example, an INTP can in this situation come across like an INFJ. This is the third easiest subtype to channel, which makes it fairly common.

The zombie represents the person who has gone all ice on you, who seems bored, apathic, and uninvolved in all ways. The zombie usually lacks energy and any source of motivation to do anything. Often, intuitives spread stereotypes of sensors that they are automatons or zombies, but that is only from an intuitive bias.

When you act in a way that is true to your temperament or general style of behaviour, but without any form of energy or passion, you enter the automaton role. An INFJ behaves like a zombie-like ISTJ, doing what they usually do, but without any energy or motivation. They appear relaxed and calm, but also slightly dead or checked out mentally.

Most of their reactions are on autopilot, based on simply responding to the environmental cues and expectations of others. This is a fairly easy archetype to channel, but eventually, your boredom and your need to care will need to be expressed in one way or another. Often, this is an archetype we step into to find calm after a time of difficulty.

Of the eight archetypes, four are outer states, states that are highly difficult to channel or hold up for a long time due to their consequences for your mood and stress. Generally, they are people we meet and get to know in our life. But we can also take these roles for the sake of others.

The muse represents that person that you find fascinating, important, or inspiring, but also stressful and scary. Their temperament and their actions seem contrary to what you are used to, but that can also pull you out of your comfort zone. Often extroverted intuitives are described to be like muses, inspiring to be around – but really, anyone can be a muse, in their own type specific way.

When a person acts interested, high on energy, and passionate, but in a way that is contrary to their usual behaviour, they are inspired. You can channel your inspiration briefly, acting in a way that is against your instincts and your general needs, but with great enthusiasm and high energy.

However, the muse state quickly makes you unbalanced, affective, restless, and your inspiration is easily shaken up by minor inconveniences. An INTJ can here briefly appear as an ENTP, and an ENTP as an INTJ. This is a relatively difficult archetype to channel or step into, and generally, you can only maintain it for a short while before your mood or your energy becomes too unstable.

The prince/ss represents that person that you find to be highly important or valuable but also stressful and demanding.

The princess represents values that are important to you but that also bring you stress and discomfort. You could call the prince/ss the representation of your higher ideals. Things you hold dear that cause you stress. Being a prince/ss can also suggest that you are being idealized by someone. An INFJs prince/ss is the ISFP. The prince/ss is the third most difficult archetype to express.

The scoundrel is the good-for-nothing, lawless type, that seems fun and fascinating, but also strikes you as a bad guy. They can get you to explore your interests and they can teach you to have fun, but they can also trick you to abandon your core values.

The scoundrel represents interests that you find fascinating but values that are contrary to your own. They can represent a temptation to do something fun that is against your core values and beliefs. You can briefly enter the role of a scoundrel, but generally, the scoundrel is an outer archetype, which means you can only access it when relating to other people. It’s one of the most difficult archetypes to channel.

The rival is the rude and obnoxious archetype that does things that you find completely irrational or stupid. The rival serves the role of teaching us to stand up for ourselves to others. When we let the rival win, we feel bad. We often build our identity towards the rival.

The rival represents outer beliefs and outer truths, the “wisdom of the crowd” or your environment. When you speak out in anger, or when your mood is unstable, and you’re tense and stressed out, you can start expressing values and interests that you don’t like or believe in. The rival becomes stronger in influence when you doubt yourself. This is the hardest archetype to channel.

The point of the archetypes