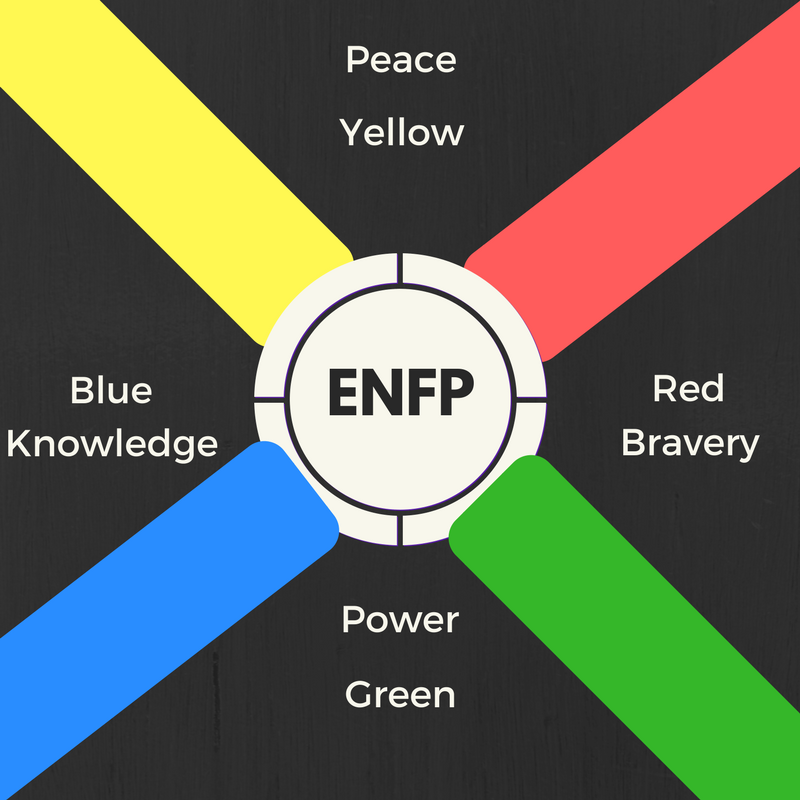 The red ENFPs life is interesting in the sense that it is the story of going from a nerdy geek to a kind of radiant champion. This Buffy The Vampire Slayer over time comes to learn their book-smarts won’t help them, that life isn’t what they studied for, and that they’re going to have to improvise.

This studious ENFP likes to prepare ahead of life and likes to read and master what they do before going out to face it. But life’s unpredictable nature can never be fully prepared for. As this ENFP grows, they grow in finding opportunities, possibilities, and ways to turn every situation for the better.

Blue ENFPs “The Path Of Knowledge”

Blue ENFPs often start off as unhealthy ones, always believing life has to go a certain way, and that everything has to be done according to rules from their parents or teachers. These ENFPs are often academic and knowledge-seeking, but somewhat rigid and neurotic about duties.

Everything has to be done in a certain way, nobody else is capable to solve the problem, and this ENFP is stressing to no end to make up for what everyone else is lacking. But this ENFP grows and succeeds in their path as they instead come into an increased understanding of people and of life. In learning about themselves and other people, and into becoming a true friend and spokesperson for people.

Yellow ENFPs “The Path Of Peace”

This is the ENFP to come off a story where everyone has a tendency to lie or deceive them, and where nobody can be truly relied upon, and the ENFP feels they have to make it on their own. But this ENFP grows when they begin to find their inner detective. When they begin exploring their curiosity, learning about the world around them. When they discover the people, and their thoughts and feelings, and not just their fears about these people.

What the ENFP previously feared to be true about others, they finally discover more about. As they ask questions, explore, and investigate the world around them, their old worries are released. The yellow ENFP has a story of coming from doubt and fears into true insight. And with it, liberation from insecurity, and genuine trust in other people.

Green ENFPs “The Path Of Power”

If the green ENFP was a character in a movie, they would be the person coming out of a sense of passivity. They may struggle with a sense that they have no control over their life, into finding a strange power or ability. This power gives them the ability to heal and see and understand. Without this ability, the ENFP is left burdened by past traumas, past wounds, and negative life experiences.

Often stuck reminiscing, thinking about how life used to be, and what happened to them in past relationships. This ENFP struggles with learning to channel their power. But if they can, they can become healers, gifted with some special ability, skill, or craft. Perhaps through using this ability, they can help other people?