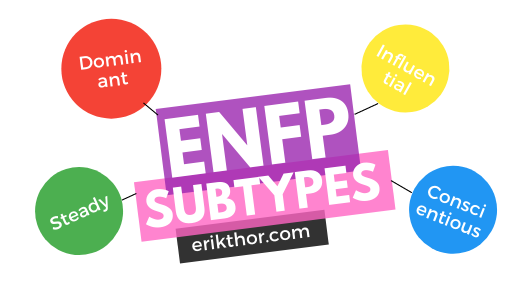 Conscientious ENFPs are always full of questions. Every option is manifested as a “what if”. Dominant ENFPs are full of whims and urges, every option feels so real it causes the blood to pump. Subtypes are defined by our mindset and how we approach and experience things. Is intuition real or is it purely hypothetical? And is it something we should act on or is it something we should show caution towards?

The influential subtype ENFP always talks and laughs about their ideas but really truth be told they think it’s all just crazy talk. The steady ENFP takes their intuition more seriously, and sees their intuition as something they need to listen and adjust their course to. To the steady ENFP, intuition is a warning: what would happen if we do something. To the dominant ENFP, the question is rather: what if we don’t do something?

No matter your personal development or mindset you’re still ultimately pulling from your core values, freedom, opportunity, change, variation, democracy, individuality, authenticity, exploration, dreams. This is the essential make-up of the ENFP but it is the most easy to recognise in the dominant ENFP, and the most difficult to spot in the conscientious ENFP.

In the conscientious ENFP we see a much stronger influence of the inferior function. All ENFPs show a weakness in certain areas, in particular, they show a lack of critical thinking, self-discipline, consistency, focus and ambitious drive. So the conscientious ENFP does their best to make up for and deal with the areas in life they feel least confident in. So they urge themselves to show focus in their exploration and to not spread themselves too thin.

They remind themselves to be realistic about their dreams. They critically analyse their feelings and make an effort to compromise their individuality so they still hold some value to the system. This effort can mask their inferior function, even to themselves. This to the point where they can think of themselves as another type. But change and variation is still change. Even when you try to stay consistent in the decisions you make. And focused exploration is still exploration, even if you decide to keep digging in the same hole for the most of the time.

Finding flow by doing what you love most

While in conscientious and steady types, there is a developed cautious tendency, and a fear of making mistakes, in the dominant and influential ENFPs, this tendency is weak. In the most extreme form, the dominant ENFP will always seize the opportunity. They’ll jump in, try new things, and they’ll constantly try out new things. They love change and will resist anyone who tries to control or reign them in.

“The system won’t keep me down” – this ENFP is a clear rebel and a catalyst and a strong individualist. They’ll say what is on their mind and they’ll do their own thing even if people tell them to be realistic about it. You can’t possibly hope to make it! How will you pay your rent? The dominant ENFP has a strong confidence and belief in self and your own strengths. One that often comes from the experience that you can always make things better.

There can be an anger in this type, a belief that “It’s me vs the world.” and sometimes an egocentrism. Beyond that, this type tends to leave a gaping hole of unfinished business. They’re often terribly unprepared for anything and don’t think critically before they go into a situation.

The Influential ENFP has a more conservative and practical mindset than we might encounter in normal ENFPs. Because of this, they tend to be dismissive towards their own ideas. Thoughts about change and freedom become humorous rather than serious experiences. Something to laugh about and make jokes about, rather than something meaningful and fascinating.

But behind their jokes and their humour, there might be hidden meaning even they are unaware of. Because of their open minded, sanguine energy. The influential ENFPs can infest any democratic arena and this ENFP will naturally blend in anywhere they go. They may be quirky and weird, and sometimes, they sound a bit crazy.

But they have a contagious enthusiasm and they’re very mild and easygoing, and so, they’re easy to talk to and get to know. Their values have less edge to them and they seem less set in their ideas and more open and agreeable. So we find it more easy to collaborate with them. But when can they ever be serious? How do you tell the joke from the reality? Why do they have to be so annoyingly impulsive?

The steady ENFP is a great contrast against the influential ENFP. Their mindset is much more careful, and they seem far more serious and controlled than we expect from normal ENFPs. The steady ENFP shows a lot of focus, just like the conscientious ENFP, but more intro-personal awareness and a stronger desire to understand before they take on a new opportunity. They’re often shy and modest and tend to shy away from social settings. They don’t like to attract too many eyes with what they do.

Typically, they spend more time sitting with their intuition and counselling themselves and in this, they have a mindset to focus on the hardest part before anything else. They want to make sure they know their heart and their mind before they jump into something. The question of this ENFP is: does my individuality fit in with the group and the people as a whole? Can I say this and express myself without alienating myself from the tribe?

There is a strong idea that if you go too far, if you’re too strong in your own shoes. If you proceed too far ahead, and make too many changes, you’ll lose touch of where you need to be going in the long run, and you will act recklessly. But what is your vision and where do you really belong? Who are your real “tribe” – your family, friends, and people? The steady ENFP seeks to make their dreams happen but beyond that, they also want their dreams to last.

The conscientious ENFP is not just shy to express themselves and what they are thinking about. But they are also slightly melancholic and pessimistic: most of the time, they expect that the worst is to come. They’ll only be disappointed if they try, and change is not going to lead anywhere. At best, this can drive this type to work really hard to make something truly happen.

They’ll discipline and steel themselves and work consistently to change a situation, even if they need to work at it for a really long time. This ENFP will sit down with something, working through a possibility detail by detail. They will be preparing for anything before they jump in and go for it. Often, they think of any possible scenario and a million ways things could go wrong.

Often, this type starts with the most difficult and negative first, hoping that when they are done with it, they can be rewarded. This type feels at their best when they have dealt with daily chores, taken care of practical matters, and finished all preparations. This so that they can feel ready to jump in and truly enjoy something.

If you like this article, feel free to share it with others. Hashtag #Conscientious #Dominant #Steady or #Influential #ENFP. Which one are you?

Get 20% off coaching and typing services if you become a patron! Donate! Dismiss