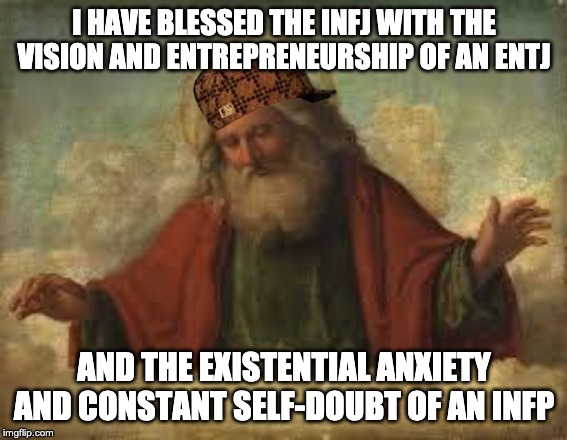 INFJs tend to be often as ambitious and hard-working as an ENTJ. Often, they have very strong visions and show a similar ability to focus and work on a long term project, just like an ENTJ. But unlike the ENTJ, the INFJ tends to constantly doubt themselves.

INFJs are very hard on themselves and tend to feel a stronger amount of guilt. While they are more empathetic and show more perspective than ENTJs, they also experience more “dark days” and more brooding tendencies.

INFJs are often very prolific and hard-working but equally they can have days where they become completely crushed by their own self-criticism. In contrast, ENTJs tend to have a radical amount of self-belief and confidence. They try their best to believe fully in themselves and their ability and that they are right in what they do.

INFJs fear ‘being too sure of themselves’ and don’t want to think too highly of themselves. If they get delusions of grandeur, they will quickly find a way to sabotage themselves and ‘cut themselves down to size.’

Because they tend to reflect a lot about their own behaviour and how they impact other people, they are more acutely aware of when they have hurt the feelings of people around them or when they have done or said something bad.

While ENTJs tend to do their best to escape from any self-critical or dark thoughts, focusing on their work and doing their best to rationalise their actions as they go, the INFJ is often forced to a halt in their creative pursuits.

Like the INFP, the INFJs creativity is fueled by their negative feelings. Negative feelings become an intimate part of the INFJs thought process and their dark days are slowly translated to great and bright ideas and visions for themselves and for humanity.

Their dark days can help them reframe and find new light at the end of the tunnel, but they also spend more time digging these deep tunnel networks. Finding the way out can take a long time and requires hard work.

Do you suffer from self-doubt and does it keep you from being more successful? How do you handle your ‘dark days’ and how does brooding affect your ability to be productive in your creative pursuits and projects?